Introduction: Deep sternal wound infections (DSWIs) are rare but devastating complication after median sternotomy following cardiac surgery. Especially in the presence of artificial material or inadequate preliminary muscle flaps, the pedicled omentum flap is due to its immunological properties, the predetermined flap in salvage procedures. 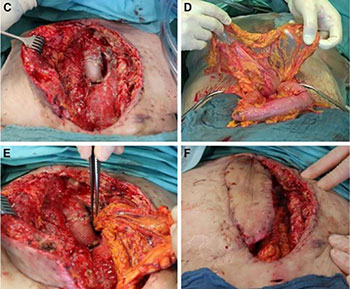 Methods: We treated 14 patients suffering a mediastinitis and open thorax using a pedicled omentoplasty as a salvage procedure because of persisting DSWIs. Omentoplasty was performed in combination with a split skin graft and the wound was closed by a vacuum-assisted therapy for 7 days. The patients’ sex and comorbid risk factors supporting DSWIs as well as the postoperative complications were recorded.

Results: Retrospective analysis of 14 patients (10 males and four females) after a follow-up time of 24 months was performed. The average age was 75 years (range: 67–83). Heart surgery took place electively in eight cases, in three cases urgently and three for emergency reasons. The preoperative Euro Score was 16 (range 3.51–42.58). We had no flap loss in any patients. The skin graft showed a full take in all patients. Two patients needed revision of an abdominal wound dehiscence after laparotomy and one patient developed hernia in the late outcome.

Discussion: The greater omentum flap has, over many years, become an ideal partner in the coverage and treatment of DSWIs. Especially due to its immunologic capacity and amorphous structure, it has the ability to fill up cavities and cover infected artificial material so residual infections can be controlled.

Omentum flap – a segment of omentum, with its supplying blood vessels, transplanted either with an intact pedicle or as free tissue to adistant area and revascularized by arterial and venous anastomoses.

Omentoplasty – Use of vascularized greater omentum to cover or fill a defect, augment arterial or portal venous circulation, absorbeffusions, or increase lymphatic drainage.