The S3I subcommittee, comprised of 43 medical professionals across various sectors, met April 20-21 in Salt Lake City. S3I approved four new standards tests and submitted them to the Rehabilitation Engineering and Assistive Technology Society of North America and the American National Standards Institute (RESNA/ANSI). These standards tests include the areas of microclimate management, envelopment/immersion, and sliding resistance/friction. If RESNA/ANSI votes to approve these standards tests, they will become national standards.

Founded in 2001 as a three-year project to fill the need for performance and reporting standards, S3I was tasked with development of uniform terminology, test methods and reporting standards for support surfaces. After formally affiliating with ANSI/RESNA in 2011, S3I became the official standards body for support surfaces in the United States. NPUAP made S3I a continuing subcommittee so it could continue its ongoing work implementing appropriate standards. Its work is a vital part of NPUAP, whose goal is to improve industry understanding of the importance of the support surface body interface, and provide the tools necessary to improve the quality of life and the ultimate outcome for patients who are bed-bound. The next S3I meeting is scheduled for October 2017. 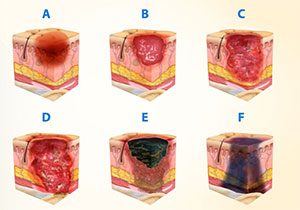 “These Standards provide the opportunity to refine measurements of microclimate performed on complex care support surfaces (mattresses), and for the first time, the ability to measure envelopment, which is one of the most critical elements of force redistribution. The last of these new standards gives us the ability to measure the forces a support surface applies to the tissue of an occupant as they move on or through the surface after the Head of Bed is elevated. This shear type force is of particular interest when working with patients at significant risk of pressure injury to the sacral region.  e are also very excited that the updated list of Terms and Definitions is well underway.” Evan Call, MS, CSM, co-chair of S3I.

“I believe the bed is a central part of the patient experience and we need to work to make it as safe and comfortable as we can for our patients,” said Arndt. “Being a part of S3I gives me a chance to learn what the engineers who build the support surfaces for our beds look at when developing tests for the surfaces. I am very grateful to have received a scholarship from NPUAP to attend these meetings! I think I will be able to contribute to the science that helps clinicians choose support surfaces.”

The National Pressure Ulcer Advisory Panel (NPUAP) is the nation’s leading scientific expert on pressure injury prevention and treatment. Our goal is to insure improved patient health and to advance public policy, education, and research.