By some estimates, bacterial strains resistant to antibiotics — so-called superbugs — will cause more deaths than cancer by 2050.

Colorado State University biomedical and chemistry researchers are using creative tactics to subvert these superbugs and their mechanisms of invasion. In particular, they’re devising new ways to keep harmful bacteria from forming sticky matrices called biofilms — and to do it without antibiotic drugs.

Researchers from the laboratory of Melissa Reynolds, associate professor of chemistry and the School of Biomedical Engineering, have created a new material that inhibits biofilm formation of the virulent superbug Pseudomonas aeruginosa. Their material, described in Advanced Functional Materials, could form the basis for a new kind of antibacterial surface that prevents infections and reduces our reliance on antibiotics. 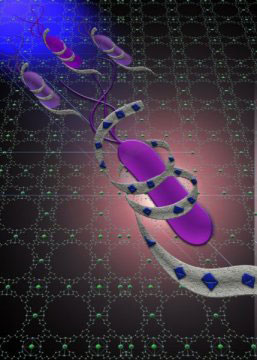 Bella Neufeld, the first author and graduate student who led the research, explained that her passion for finding new ways to fight superbugs is motivated by how adaptive and impenetrable they are, especially when they are allowed to form biofilms.

“Biofilms are nasty once they form, and incredibly difficult to get rid of,” Neufeld said.

Many people picture bacteria and other microorganisms in their friendlier, free-floating state — like plankton swimming in a high school petri dish. But when bacteria are able to attach to a surface and form a biofilm, they become stronger and more resistant to normal drugs.

In a classic example, cystic fibrosis patients are sickened by hordes of P. aeruginosa bacteria forming a sticky film on the endothelial cells of the patients’ lungs. Once those bacteria attach, drugs won’t kill them.

Or, a wound can become infected with a bacterial biofilm, making it more difficult for that wound to heal.

Reynolds’ research group makes biocompatible devices and materials that resist infection and won’t be rejected by the body. In this most recent work, they’ve designed a material with inherent properties that keep a bacterial film from forming in the first place.